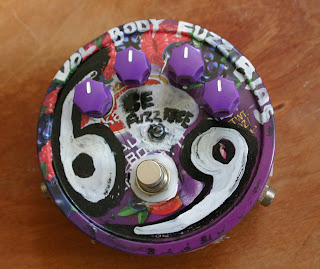 Once I had a few Germanium Tranny lying around and I knew how to measure them properly for leakage and gain I continued my quest for the perfect fuzz with the most famous fuzz in the world of Rock and Blues. My first fuzz ever was the Runoffgroove Silicon Fuzz Face which I built a few years ago. This time I'm going all the way back to 1968


This was, of course, Fuzz Face, issued around 1966 by Dallas Arbiter in the UK. The original Face was built with 2 Germanium trannys which were replaced in the early 70's with Silicon ones.


Hendrix, Muddy Waters and Gilmour used the Ge version and I thought I'd give it a go as it is such a simple design. I got a round candy box from a friend at work and finally decided to go with the FullTone '69 schematic which appears on GeneralGuitarGadgets. It's not the finest enclosure but....its round just like the Face and I kept the name - '69.

This version implements BIAS and BODY controls for more tone control, very similar to the FullTone version and you can really play a lot with the sound. The AC128 Ge Trannys are supposed to be less stable and temperature dependent but I don't  feel any weird behavior from the unit on stage or at home. All I heard was great singing quality which really makes your guitar sound like a square wave synth. Using the BIAS knob or the guitar volume knob gives you that clean edgy sparkling Hendrix sound which is heard so often when he plays chords. I always thought this was an amp thing. Compared to a Silicon Fuzz Face it is deeper and bassier. anyway its singing quality and voicing is great. quite an amazing sound for such a simple design. Most of the time I find myself having the FUZZ knob cranked all the way up.  You can look up the schematic on the GeneralGuitarGadgets website or get it here.
Posted by Doron Barness at 11:59 PM 0 comments

The fuzz that Burns 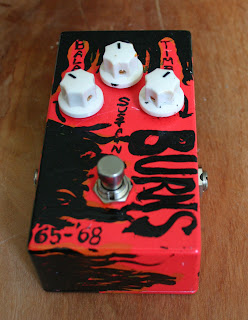 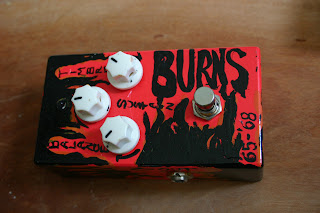 Continuing my search for that perfect fuzz sound I realized that in those days our great forefathers used Germanium Transistors in their Fuzz boxes and that included The Beatles, Stones' Keith Richards, Robert Fripp of King Crimson, Hendrix, Jimmy Page, Dick Dale, Mick Ronson and probably every Psych and Garage band in The US between 1965-1969. These guys have either used a Maestro FZ-1 (USA) or a Tonebender MK1 (England). Those two pedals shared a lot of similarities with regards to the schematics and the trannys used in them (low gain high leakage Germs) and both seemed impossible to build without some research and experimentation.


Needless to say I had to build one of those. I found a lot of material but a lot of controversial stuff too and it all seemed like there was a lot of voodoo around these schematics and those Germanium Trannys that eventually I decided to start with some easier Germanium pedals before I reached the hard ones.

The first schematic I found that seemed reliable and tunable was the Baldwin-Burns-Buzzaround (produced 1965-68) which according to the stories was used by Fripp on the King Crimson "RED" album which is probably one of my top 10 albums of all times. His Les Paul sounds just incredible through that fuzz and probably followed by a HiWatt amp. I gave it a go and it came out FANTASTIC. My first Germanium Fuzz with AC128 Trannys measured for Hfe Gain and leakage. It's not the original trannys used in the original circuit but it still sounds like the real deal to me. The Schematic can be found here. I used my own layout but a lot of info can be found here, and here

So here is my BBB takeoff which I named BURNS and had it enclosed in a RED (like the album) enclosure. The controls are labeled "Balance" (volume), "Timbre" (tone) and "Sustain" (gain) but they are so coupled (interleaved) so that you can't really use them in the ordinary way and really tune all three for each setting. This box really nails that Starless sound... btw it would be a few months before I really succeeded building a variation of the Maestro FZ-1.

This mean and nasty fuzz is somewhere between the Shin-Ei Fuzz Companion and the Mosrite Fuzzrite. It's buzzy and zippy all at once and really does that 1966 sax-like buzz in a very convincing manner.


I built it because I was looking for that elusive mid 60's fuzz which is both thick and buzzy like that found on Garage Psych albums by west coast bands like the Seeds or Strawberry Alarm Clocks. The first feedback I got on the web stated I should go for a Mosrite Fuzzrite sound or something similar. Finding a simple schematic using Silicon transistors I gave it shot. It's a silicon fuzz and I tried several silicon trannys until I found the right combination. Well I have to admit it...IT SOUNDS GREAT, both on guitar and bass. Beautiful on single coils and Humbuckers. I really nailed the Spirit in the Sky buzz sound by finger picking with the Neck pickup.

The only addition I added was a 68k resistor in series with the 199nF cap at the input to tame the fuzz for humbuckers and to have some extra control on the pedal which simulates the effect of rolling off the guitar's volume knob a bit. This is a great mod and could be hooked up on an SPST switch to enable both options.

After some years building all kinds of ancient fuzz circuits I can definitely say that this circuit delivers some crazy vintage sounds which you wouldn't get from any other pedal. Very buzzy-zippy-sax-like in your face fuzz. NOT for chords but more for those wacky 60's solos and heavy riffs. Amazing on bass and on guitars on the neck pickup. It's that simple....and that rewarding. Mean, splatty and nasty!

Other garage riffs and solos which can be nailed are those by the Seeds. Mellow playing with your thumb on the lower strings with the neck pickup really brings out the buzziness in a beautiful way.

The TONE control really changes the character of the sound and goes from fat crunch to mean sharp buzz. On neck pickup and playing lower strings with your fingers you get amazing sax-like character which is exactly what I was looking for. It's meaner than the Mosrite but not as aggressive as the Shin-Ei. It's just the perfect balance between the two. I love it!!!

If you wanna build the germanium version you can find the schematic here:

The great layouts by Dragonfly can be found on the aronnelson page here:  http://www.aronnelson.com/gallery/main.php/v/DRAGONFLY-LAYOUTS_0/album18/FUZZ+PCB/ORPHEUM+OLD+SCHOOL+LAYOUT.GIF.html?g2_imageViewsIndex=1

The Schematic I used for the silicon version is no longer available for some reason on the web so I am adding it here if Dragonfly doesn't mind:

A fascinating comparison between some vintage fuzz circuits which are all based on similar architecture with minor differences can also be found here.

Will soon add a clip to demo this beast.

I like the paint job I did. It was my first attempt at doing my own art on these pedals and once I saw the result I never looked back and went on doing the art on all my future pedals.

I tried to find a different name for it as I couldn't understand why they named it Orpheum. It should have been called something like Morpheum.

Highly recommended for any newbee in the DIY business. Easy to build and tune and sounds really authentic and musical.
Posted by Doron Barness at 1:57 AM 6 comments