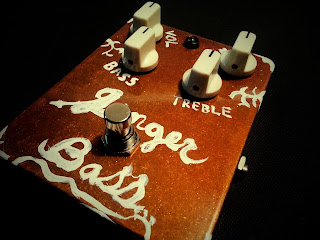 It has has been a while since I revamped my bass sound palette. I have been using bass fuzzes, distortions and filters of all kinds and I was pretty satisfied. I love the RAT clone on bass giving me the Kim Gordon, Sonic Youth style. I love the Mu-Tron III or the Tri-Vibe (Uni-Vibe) on bass for some really wacked synthy filtering sounds, and I always sleep well after a night out with a Big Muff, Germanium Fuzz Face or Fuzzrite for killer chain-saw bass riffs. One thing I never got was that sweet overdrive of those old Ampeg amps. Even the Runoffgroove Flipster was not a constant lodger on my rig since I was just not using it enough although it sounded pretty strong and biting. When Runoffgroove came out with the Ginger circuit and stated that it was an improvement over the Flipster, I couldn't resist and it has been sitting on my wish list for over a year.
Well I finished it and ordered the most beautiful ginger-sparkly-rust enclosure on Mammoth Electronics. When I first played it I knew that it will most definitely replace the Flipster on the bass rig and that just maybe I found that 60's bass sound I love so much. Moreover, what really stunned me was the great overdrive sound it gave me on my electric guitar with humbuckers. Wow, if you want to drive your guitar with some heavy bass fuzz riffs, this unit can really complement a good fuzz for ultra pumping riffs.

The Project itself was not difficult and the noise was not enough to go and replace the trimmers with fixed resistors once you bias the 2N5457 Q1 and Q2. In fact, I always socket my trannies so that I can replace them or test a few before settling down. I did have to troubleshoot a bit. On the first attempt to bias Q1 I realized that the trimmer does not change the drain voltage at all. I found out the circuit ground was not connected. What a shame. Then I saw it still didn't work after I connected the ground. Found out another connection was not properly soldered or was it a cold soldering case? I don't know but once the little troubleshooting was done I was in bass heaven for about an hour until I realized it was 2 in the morning.

This build certainly got me going berserk on my bass all over again and that's what I like about it. I don't have a fender P-bass or a J-bass but I am convinced that this pedal sounds even better on fender basses than it does on my Music-Man style bass.

Ginger bass by Runoffgroove by Doron Barness on Mixcloud

The schematic, and pref-board layout which I love so much from Runoffgroove can be found here. It's too bad the guys over there at Runoffgroove have stopped publishing layouts. I really dig their designs and so does anyone I know. I just might print a T-shirt with a "holler" to bring them back to earth. 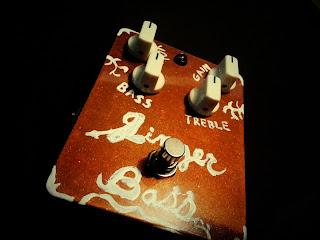 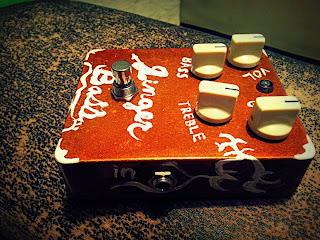 Posted by Doron Barness at 6:39 AM 0 comments