Wow....I just have to share this video as this guy is on a true fuzz quest for 60s Germanium mayham. Take 12 pedals and play the same chain and same riffs, chords, whatever so that you can actually understand the different attitude of each one. I love the extra stuff he puts as what each fuzz was famous for and some of the famous riffs recorded with it.

Check out his blog and his other related videos. Great job!

Posted by Doron Barness at 3:48 AM 0 comments

This is the first time I am revisiting a pedal and rebuilding it all over again. As you probably already know, the Tone Bender is one of the most elusive and tricky fuzz pedals around. The Germanium versions are hard to bias and you have to order specially selected transistors. This is not all that difficult once you understand how to measure hfe (gain) and leakage. Nevertheless, I have never built a true vintage Germanium Tone Bender and when I do, it will probably be a Prescription Electronics Yard Box or a true MK I version.

Anyway, I let the first Led Bender go and now it is happily crushing stages around the Zurich area with a really great band called Rivercash. I couldn't live without it so I had to build another one, and again, I tried starting out with the regular silicon versions which are running around the web. What can I say? another flop. No version sounded good and I couldn't understand why. The next thing I did was go back to the Hot Silicon version which sounded so well with my first Led Bender build. Voila...like magic. Wonderful buzz fuzz duzz muzz nuzz.


I re-checked some of the biasing issues and ended up going closer to the Yard Box version with the 3.3k resistor attached to the Fuzz pot. All other biasing resistors seemed OK. Next, I changed the input capacitor on the FAT switch from 10uF to 100nF to get the Yard Box input cap. Transistors, as before Q1 and Q4 low gain 2N2369. Q2 2N3904 or some other medium gain tranny. Q3 BC108 or other medium gain tranny. I also tried 2N222A at Q3 and it was equally great. The tone knob was reversed so that cranking it would enable a fuller tone and CCW would make it thin and nasty.

The real magic with this pedal is on the lower settings of the Fuzz/Attack pot. Between 0 and 4 (on a 1 to 10 scale), the fuzz has some really great sounding crunch with the TONE knob crancked for full body. Lowering the guitar volume knob a little gives you some great unheard overdrives.

Here are some gut shots: 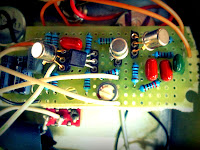 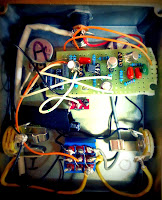 And about the artwork: I started with the Gold Glitter BB1590 from Mammoth and started painting using the same concept of the Zoso sign from Jimmy Page and added the other Zeppelin symbols around the sides, and of course, my ZUS logo which really complements the Page Zoso. 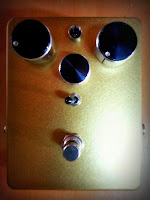 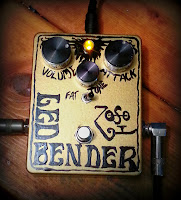 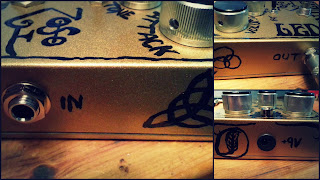 So, don't let this one go unbuilt. It's silicon, so it's guaranteed to deliver. And you know the best thing? When I hooked it up in front of a silicon Fuzz Face? AAAAmmmmaaazzziiing tone. You can really dial those Stoner Rock, Doom, Garage, Noise Grunge, Psychedelic Heavy Rock sound.

Probably one of my top 5 fuzz combinations!