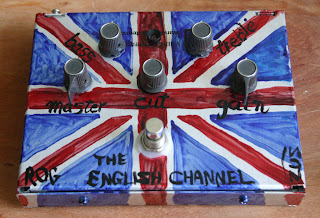 The reason I got into building guitar amp emulation pedals was because Fuzz pedals cannot really produce they're nasty, yet pleasant, sound without the softening effect of the amp and its speaker(s) cabinet. Getting some software simulations of speaker cabinets and connecting the Plexi (Thor) and the Princton (Prof. Tweed) pedals directly to the soundcard's preamps gave me such great results so I thought I better continue my amp overdrive builds and take it further. This time it was the VOX AC30 TOP BOOST emulation achieved by the ROG design which they named the "English Channel". This pedal Rocks!!!


The classic Vox AC amps together with Fender and Marshall form the complete triangle of great 60s amps. The Vox, in a combination with a Fender guitar produced the unique "Western" Shadows sound of Hank Marvin and was used by Vic Flick to record the first James Bond theme. Brian May, Ritchie Blackmore and Rory Gallagher used a Treble Booster pedal to get the amp to sound Fuzzy when overdriven. The bands who cherished this amp go from the Beatles and the Stones to Radiohead, REM, U2, Suede and Tom Petty. It actually has a major part in the sound of the British Invasion. American Garage, Psych and Rock bands of the late 60s loved and embraced the new kid on the block. Because it's a little dark sounding amp compared with Fender amps, the use of the Arbiter Rangemaster as a treble booster became the secret weapon of many players. This kind of boost pushed the tubes in the amp to a unique sound and thus put the Rangemaster treble booster on the same list with other fuzz pedals and made the combination of the two a guaranteed success. Truth is that it sounds great with a lot of fuzz pedals and a Wah just in front.

The pedal as an overdrive can drive single pickups from clean to really heavy drive. Humbuckers sound really fat and juicy and are not that clean on low settings. The tone stack is flexible although I don't find myself using the Cuttoff knob much to attenuate the highs. I improvised the enclosure and got a very good overdrive pedal with a lot of character. You can get the schematic here.
Posted by Doron Barness at 3:53 PM